In chemistry, He turned water to wine.

In biology, He was born without the normal conception;

In physics, He disapproved the law of gravity when He ascended into   heaven;

In economics, He disapproved the law of diminishing return by feeding
5000 men with two fishes & 5 loaves of bread;

In medicine, He cured the sick and the blind without administering a
single dose of drugs,
In history, He is the beginning and the end;

In government, He said that He shall be called Wonderful Counselor,   Prince of Peace;

In religion, He said no one comes to the Father except through Him;

So. Who is He?  He is Jesus!
Join me and let’s celebrate Him; He is worthy.

The eyes beholding this message shall not behold evil, the hand that
will send this message to everybody shall not labor in vain, and the
mouth saying amen to this prayer shall smile forever.  Remain in God and
seek his face always.  Amen!

In God I’ve found everything!
The Greatest Man in History 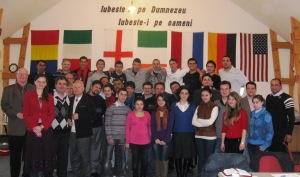 Today we had the second meeting this year  for „Barnabas” training seminars. It was a blessed time.

We had people  attend   from 7 churches in the area including our church.

We study the book of Acts , and how we can build a healthy church using the New Testament model. Or rather  how can we allow  God to work through  us, and using us for His missions and purpose.

Good fellowship, good teaching and all the students got encourage and motivated for ministry. Pastor Doug J , share the teaching with us.

Now we are looking foreword  for the meeting in May. Until this meeting we may have some outreach together ( the students that participate in the Barnabas seminaries ). I look foreword  for that .

Busy week , I need some rest.

Keep us in your prayers.

This is Great. We just had a great service of Ordination and Opening  of the new church plant from London U.K.

I had the blessing to ordain for ministry as the Pastor of the Trinity Church London, Pastor George Enache.

We are confident that this work of God it will Prosper and George and His family will be use by God in a wonderful way.

Praise God for this new church!